Cooking gets you places. My last gig was at a festival/camp-out called Experiment Days. Lots of workshops on sustainable living, co-housing, recycling and other good stuff.

Gregor of cooking collective Suppe & Mucke organized most of the equipment and food. We set up the kitchen in a makeshift wooden porch in front of a storage trailer.

With gas cookers and an improvised brick furnace, we supplied between 20 and 50 people a night. Supporters of the crew donated cakes and spreads. All of the food was vegan.

I cooked twice. The first night I made vegetable fritters and breaded zucchini, the second night, I made a pasta & veggie stir fry.

Cooking is a great team experience, but it also appeases petty dictators like myself, because you can take it out on the onions if you’re frustrated (these §#!* onions). 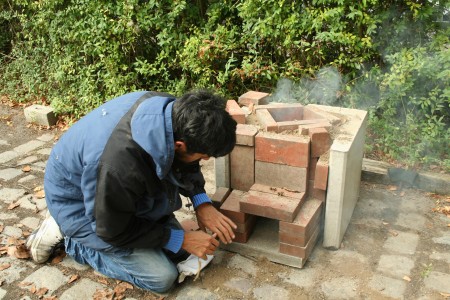 A cooking team should collaborate organically. Members can manage each other: Give your colleage a pat on the back, ask how to chop the peppers, grab some dirty plates when there’s “nothing” to do, ask the guy who’s about to sweeten the fruit salad if that’s really sugar.

Many helpers, not just newbies wait to be assigned a task and then take an extended cigarette break as soon as they’re done. That’s how you’re trained at minimum-wage ex-con jobs.

Overcoming this work ethic, not just in myself, but in others, is one of the prime reasons why I spend 40 hours a week feeding people for free.

In a low-profit cooking collective such as a VoKü, you don’t work for the money. My reason for working to practice my intrinsic motivation. If you don’t shirk and keep smiling, it will rub off on your colleagues.

I try to encourage people, to let them play around and mess up – praise is the only remuneration. No matter if you’re more experienced, if you nanny your colleagues, they’ll become dependents instead of helpers and you fall into a hierarchy. We’re all learners.

I’ve seen volunteer cooking crews work more efficiently than many commercial kitchens. Of course, people don’t all have the same pace: some are insane Stakhanovites, others work more slowly, and no one wants to do the dishes – unless they feel grateful. People develop a sense of what’s their fair share pretty quickly, without anyone rolling eyes at them.

I’m learning to focus on the process, not the product. When I organize a cookout, I usually don’t know what I’m going to cook when I turn on the gas.

I know about 5 or 6 recipes by heart and the rest is improvisation. More important than knowing recipes is having intuition: knowing which ingredients blend well, using just enough oil, paying attention to the stove.

Never forget that you have humans with actual brains around you – get people to activate their synapses. I often make the mistake to accommodate people’s requests for repetitive tasks.

Like most folks, I don’t want others to work for me – I want them to think for me. I try to ask more questions than I answer when I cook. Still, I revel too much in the admiration I receive when people think I know what I’m doing. This is how Napoleon must have felt on his trek to Russia.

Keep a pleasant conversation going, don’t let the greedy eaters rush you. Dare to show your incompetence. Many good cooks I’ve seen seem to move in slow-motion when you work with them, but they produce good food, in time and in the right quantity – and they’re still pleasant company after a long day.

If someone does your job better than you, so what? Let her do it and have some sugary snacks. After all, there’s no money or medals involved.